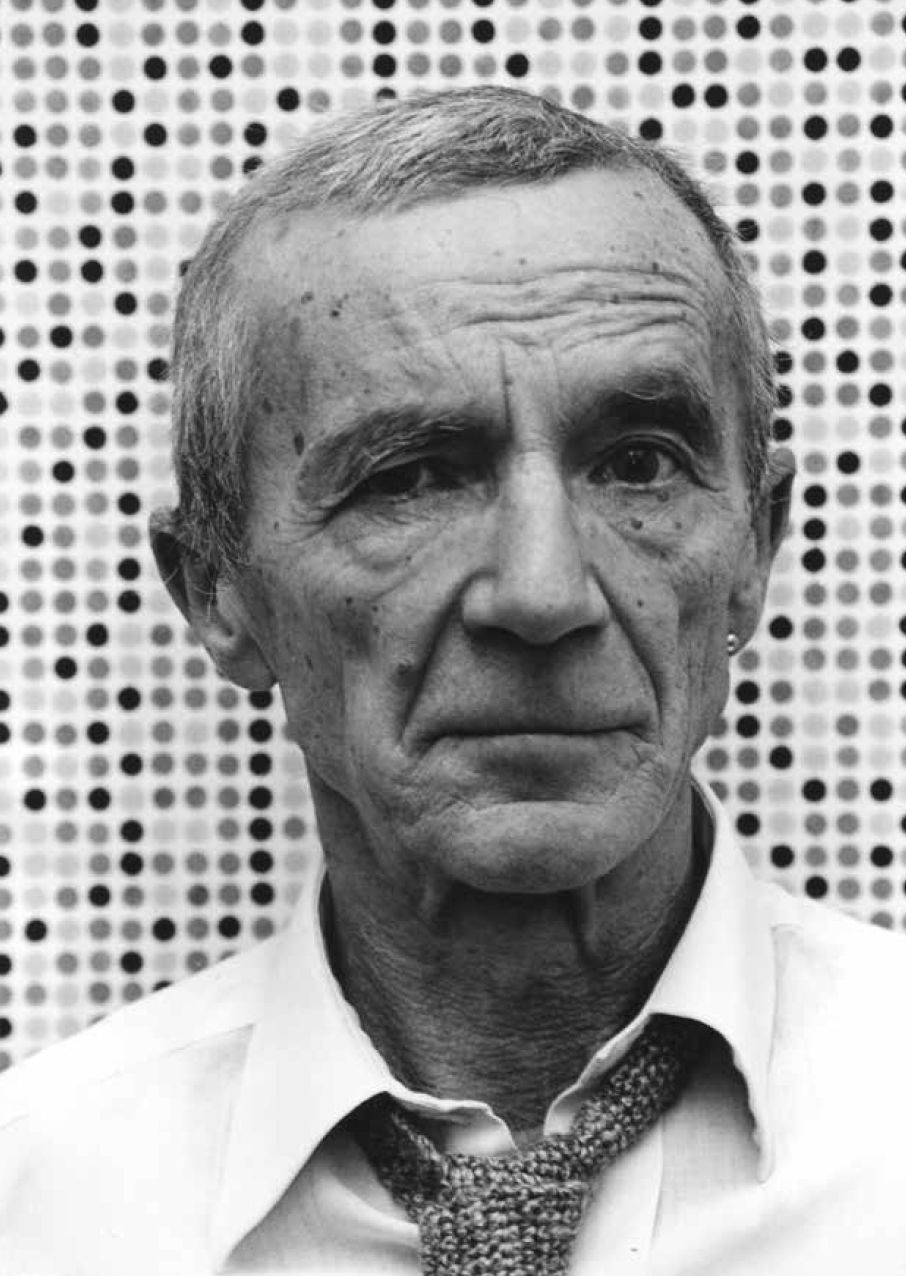 “A profoundly modern artist, because he is often broken and reflected in himself” – this is how Stefan Lüddemann describes the Lingen-born artist Harry Kramer. His work is characterised by several individual phases in which the sculptor, who never completed any artistic training, devoted himself entirely to one thing.

Those who remember Harry Kramer know above all his wire sculptures. Created between 1961 and 1967, he caused a sensation at documenta 3 with these “kinetic sculptures”[1]: the corpus of wire mesh, in the form of a sphere, a cube, later also approximating a hand or a foot, a small-scale cosmos of black, grid-like struts. Within it a “system of moving elements”, connected by rubber bands, which transmit the power of a small electric motor and, when it is switched on, keep the whole structure constantly in motion. Jerkily, as if out of time, small balls sway, cogs turn, tiny hammers strike little bells, a restless scurrying in the wire frame. Within his work, however, these sculptures seem like the logical next step: From his mechanical theatre – an “uncanny phantasmagoria”[2], writes a journalist in the ZEIT in 1955 about the “13 Scenes” shown at the Springer Galerie in Berlin – to the automotive figures, already disembodied, bare heads on rims, moving robot-like on their large gears, and the short films with these same figures and their “bizarre comedy”[3], for which Kramer receives the Bundesfilmpreis and a Golden Lion at the Venice Film Biennale. From there it is not far to the wire sculptures of the 1960s.

He also quotes them in the furniture sculptures of the later decade: everyday objects are combined with simple pieces of furniture, painted in garish colours and illuminated with isolated light bulbs. These objects as well as the “Schiebeplastiken” (Sliding Sculptures), organic forms with precisely fitting partial elements that can be slid against each other, meet with ambivalent opinions in the art world. Kramer turned “the unwieldy work of art into an object that is as much a treat for the hand as for the eye”[4] and was dismissed by many as an attempt to finally be successful on the art market. In 1970, a turning point in his work occurred: he took over the professorship for sculpture at the Gesamthochschule Kassel: “Do not demonstrate art, but authentically live it”[5] is his maxim. In the flat hierarchy of his class, he subordinates his own production almost entirely to the collective, producing only a few works during this phase. Instead, he becomes a work of art himself: in the series “Artificial People” from 1972/73, two automata are exhibited that are moulded after his face and body. If you insert a coin, one of them moves its checkered limbs, the other opens a small winged door in its chest and plays a recording of Kramer’s voice. Nearly 10 years after his arrival in Kassel, he began again with a project of his own, the Scripture Tablets on the Apocalypse: on 24 panels are the texts of the Revelation of John, translated into a code of four differently coloured dots in acrylic. At the opening of Harry Kramer’s 1995 retrospective in Lingen, these panels were integrated into a spectacular performance at which the artist was also present. On the gallery running the length of Hall IV, they were displayed on easels and illuminated with 20 spotlights, the only light sources in the room. The spotlights of a truck lit the way for the visitors who entered the hall to the avant-garde jazz rock of the band “Ugly Culture” from Cologne.

His last project was the Nekropole in Kassel, an artists’ cemetery for renowned artists, which he financed largely from his own capital and the sale of the Mechanisches Theater. Harry Kramer was himself buried anonymously on the grounds at Habichtswald.

Harry Kramer is born on 25 January 1925 in Lingen, in a poor environment where his parents prophesy a life as a street sweeper because he cannot master German legalese. When he is 7 years old, his mother dies of tuberculosis. Afterwards, the lanky boy Harry withdraws into his innermost self and, looking back on this time, later calls himself an impostor. After training as a hairdresser and doing his military service, he works as a dancer and actor for four years before he starts working at the “Mechanical Theatre” in 1952. In 1956 he moved to Paris, followed by stays in the USA, exhibitions and a guest lectureship at the Hochschule für Bildende Künste Hamburg. From 1970 to 1992 he taught sculpture at the Gesamthochschule Kassel, and in his last year there the Kassel Nekropole opened. Harry Kramer died in Kassel on 20 February 1997.