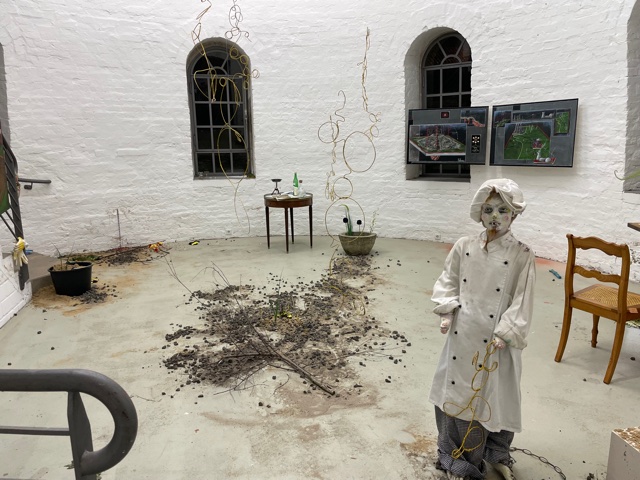 In the period from July 30 to October 24, 2021, the artist Veit Laurent Kurz will realize an installation and a video film specially designed for the water tower of the Kunsthalle Lingen as part of the Dutch Biennale “Into Nature – New Energy”. The Biennale is organized and realized for the third time since 2016 by artistic director Hans den Hartog Jager in collaboration with curator Michiel van der Kaaij. The concept consists of an artistically formulated reflection of the Bargerveen nature reserve in the Netherlands in the province of Drenthe. It is the only remaining high moorland in Holland, whose history is permeated by different forms of energy: historical energy, disappearing energy, invisible energy, controversial energy and new energy. About three hundred bird species inhabit the area, forty dragonfly species, thirty butterfly species, and nearly nine hundred moth species.
Even more crucial to the area’s importance, however, is that Bargerveen is now a critical part of the province’s energy landscape-a landscape that owes its existence in part to the energy it produces. Just across the border in Germany, dozens of tall windmills stand – clearly visible from the moors. And in Lingen, also just across the border, stands a nuclear power plant. All these different ways of generating energy are still associated with dilemmas. What do they mean for the landscape? And why do the people who live there bear the burden of this energy production, but feel that they themselves get relatively little out of it? The consequences of this tension are becoming increasingly visible. The exhibition “Into Nature – New Energy” aims to bring new energy to the Bargerveen and to reflect on the way it is generated. The artworks presented shed more light on the history of this region and highlight the social impact of energy. Another location of the Biennale is the water tower of the Kunsthalle Lingen with an artwork by Veit Laurent Kurz.
Veit Laurent Kurz (born 1985 in Erbach, lives in New York and Berlin) completed his liberal arts studies at the Hochschule für Bildende Künste, Städelschule, in Frankfurt am Main. He presented his artistic works in solo exhibitions at the Kunstverein Nürnberg, the Whitney Museum of Modern Art in New York and the Städtische Galerie Delmenhorst, among others, and participated in group exhibitions at “Made in Germany 3” at the Kestner Gesellschaft in Hanover, as well as at the Halle für Kunst in Lüneburg and the Kunstverein in Dortmund.

In the world of Veit Laurent Kurz, it is no longer overwhelming nature that touches us and gives us comfort on the one hand and scares us and confronts us with our vulnerability on the other. In his opinion, it is occupied today by more modern phenomena such as nuclear reactors, from which an archaic fear seems to emanate. As volcanoes of modern times, they permanently pose an invisible, existential threat.

Kurz fights off these demons by replacing them with others: the Dilldapps – goblin-like figures that appear in German fairy tales, but in a modern guise. They fulfill all sorts of roles in Kurz’s works. The Dilldapps were created in the Dutch high moor Bargerveen from radiation after the Chernobyl nuclear accident on April 26, 1986. In 2021, they help the artist restore the balance between the bog, the volcanoes that Veit Laurent Kurz makes rise and erupt in three places in Bargerveen, and the real nuclear center in nearby Lingen. He thus establishes a concrete connection between the Bargerveen and the water tower near the Kunsthalle in Lingen, the artist’s “watchtower.” From there, he surveys his field of activity as a “volcano whisperer,” so to speak. Visitors to this tower are greeted by domestic furnishings including a bed and a chair. A projection completes this installation.